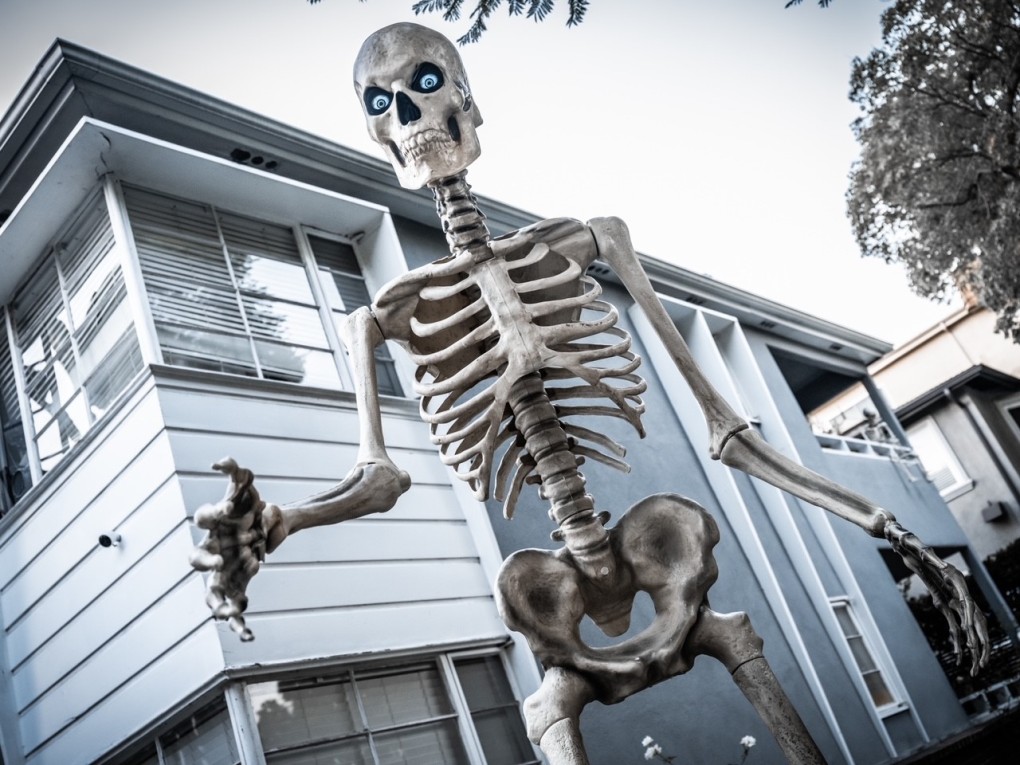 We’re just here for the boos! My pre-fiance, Brian, loves Halloween. No, like loves Halloween. So when he asked a few years ago if he could decorate the building, it started off innocent enough with a few tombstones. Then came the handmade coffin, then a smoke machine, then a spider the size of a small car. Each year he’s expanded on his, ahem, inventory – I mean display.

Well this year I was in for a surprise when a box the size of our mattress showed up in August. August! What crawled out of that box was none other than a 12 foot tall skeleton with light up eyes. Brian looked like a dwarf standing next to it! He tried to hide his mischievous smirk when he looked at his new toy and then to me to see if I would scold him for his frivolous (and secret) purchase.

I looked him straight in the eye and said, “I am really disappointed in you.” He kind of chuckled under his breath and then I deadpanned, “I am really disappointed that you didn’t buy two.” I mean, come on, I have to admit that a skeleton that can easily peep right into my second floor bathroom window while I’m showering is kind of a cool addition.

Then we added those good ol’ headstones, the car-sized spider, last year’s purchase: a skeleton horse with a new, black, glittery skeleton rider, and pretty much everything else Brian had squirreled away.

We normally confine the Halloween decorations to only the front yard of the building, but since we remodeled and relandscaped it last year and the trees have grown in, our usual set-up had to be reimagined since it would’ve been hidden behind the tall hedge. So we decided to try something new and instead stage it at the entrance and along the driveway of our building this year.

When we decorate for Christmas, I love to hang oversized white and gold ornaments over the driveway and last year we created a more permanent cable system that is reusable and easier to put up than fishing line. So I had this idea that we could repurpose the cables for Halloween and hang bats and skeleton spiders from up above. Brian had the idea to swag beef net “webbing” over the cables so that the spiders looked like they had created a home for themselves. As a final touch, our ghost girl hovers in the center and watches over the building and I like to joke that she’s a potential new tenant that prefers an upper floor.

We still had a lot of open cables so Brian suggested we hang the faux flame candles that we purchased for another project and didn’t end up using. They had just been sitting in the attic so he drilled some holes and looped fishing line through them so they hung upside down a la Harry Potter. This has been my favorite new element by far this year. To see the soft, warm glow of candles that appear to be floating above the driveway is really quite magical at night.

We tried to create vignettes all along the driveway and for a little property management humor, we set up a spot with a “manager” sitting in a chair holding a “Vacancy Available” sign next to an open coffin with two occupants scrambling for the chance to be interred. A metal arbor with dead tree limbs still attached frames the scene and we added black flowers to the arch of the arbor. We had been storing the arbor that was being thrown away by a restaurant for years when I said, “When else are we gonna use this thing?”

And then, this year, we have a vacant first floor apartment that we’re remodeling so I came up with the idea to create a scene in the windows and use the glow-in-the-dark skeletons that don’t really go with the rest of the outdoor decor. And Brian finally got to put one of those floor fans that tenants always throw out when they move to good use and wired a skeleton to it and turned it on to add some movement.

We have a few more elements to add to finish it all up (a cemetery sign spanning the driveway), but we’re super happy with the skele-fun we’ve been able to conjure up during such a bummer year. To see the kid’s faces when they run down the driveway with their parents is just pure Halloween excitement. #TrickOrSuite, witches!

What’s your favorite part of this year’s Halloween decor? Let us know in the comments below.

have something suite to say? Cancel reply